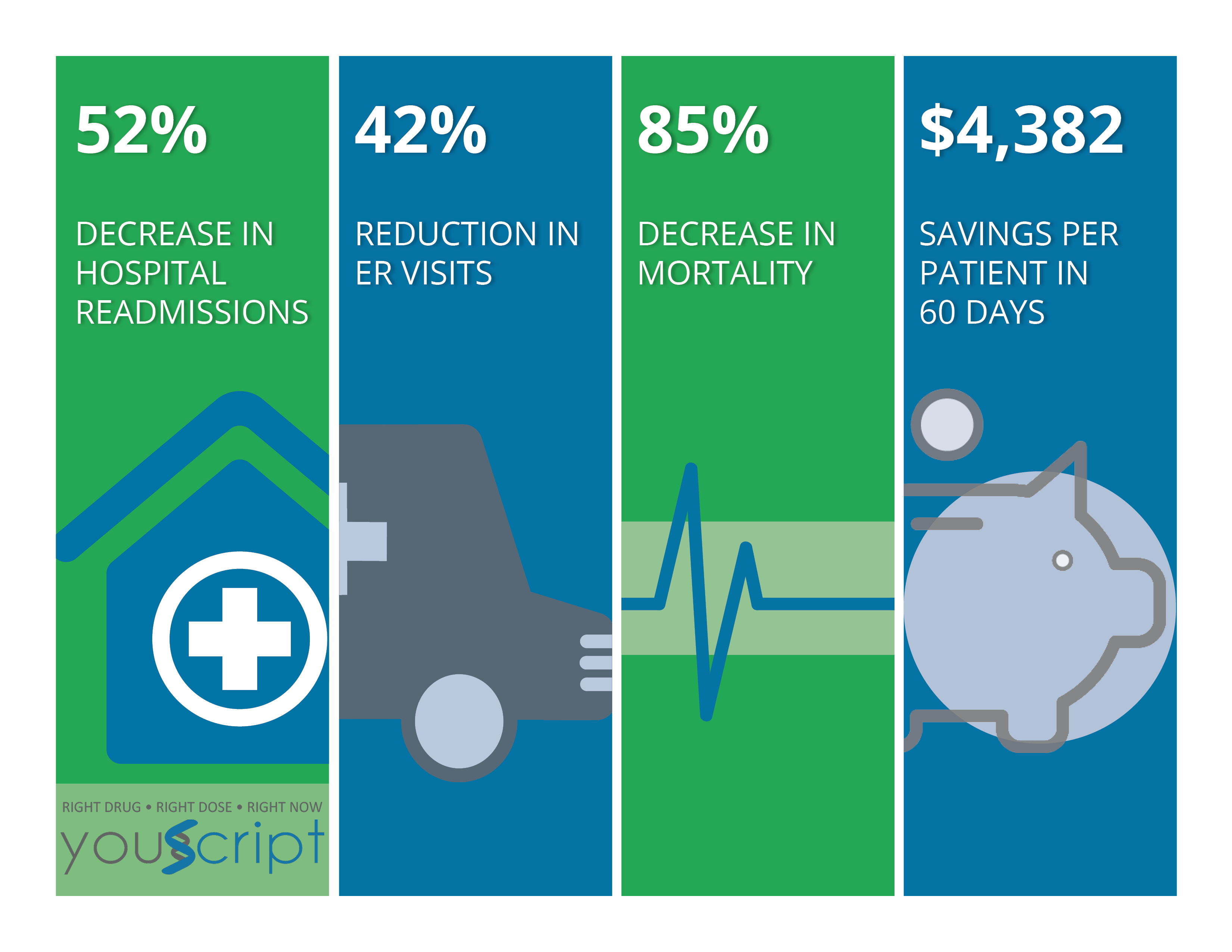 Seattle, WA — YouScript, a proprietary clinical decision support tool designed to assist in medication therapy management, has been shown to reduce readmissions by 52 percent (p=0.007) and ER visits by 42 percent (p=0.045) in patients over 50 taking multiple medications when combined with pharmacogenetic testing.

Researchers at Harding University and Unity Health-White County Medical Center, in collaboration with Genelex Labs, a pioneer in pharmacogenomic testing, and precision prescribing software company, YouScript, conducted a randomized controlled trial in a high-risk population of chronically ill polypharmacy patients aged 50 years and older admitted to home health care after an in-patient hospitalization. The trial was designed to incorporate pharmacogenetic data into an integrated clinical decision support system and compare the results to a standard drug information system.

This study validates the results of the IMPACT study completed by the University of Utah in 2015 in which hospitalizations were reduced 39% and ER visits 79% in elderly polypharmacy patients in an ambulatory environment in 4-months. In addition to re-hospitalization and ED visit metrics; the new study examined secondary endpoints including death and Medicare administrative quality measures. Risk of death decreased by 85 percent (p=0.05) compared to the control group and researchers estimated a potential per capita cost savings of $4,382 based upon Medicare average all-cause readmission and ER visit cost in only 60-days. The results of the study were recently published in PLOS ONE.

“If reproduced across the entire Medicare home health population, this would save billions of dollars and thousands of lives every year. Not only does this meet the goals of the Triple Aim, but it brings to bear the question, when does it become a patient safety issue for this not to be part of the standard of care for polypharmacy patients,” said Kristine Ashcraft, CEO of Seattle-based YouScript. “We appreciate all the hard work Harding University has done and thank the patients at Unity Health’s White County Medical Center for their participation in this landmark study validating the power of precision medicine.”

The study examined two groups of 50-and-older home health patients taking an average of 11.6 prescription drugs. The mean Outcome and Assessment Information Set (OASIS) score for overall health at the start of intervention, drug count at baseline, and pharmacogenetic risk, the likelihood that testing would reveal substantial gene based drug interactions, in the tested and untested groups were the same. The study population was selected to have a higher than average return on pharmacogenetic testing defined by the likely frequency of drugs interacting with cytochromes or CYPs, enzymes in the liver that metabolize many medications. Drugs are currently prescribed assuming normal genetics for the CYPs when only 7% of patients are normal for all five of the main CYPs.

The primary outcome measures were the number of readmissions and ER visits at 30 days and 60 days after discharge from the hospital. These findings occurred in a Home Health Agency (HHA) that, according to 2015 Home Health Quality Improvement reporting was already in the 5th – 12th percentile CMS benchmark group for lowest readmissions.

Lindsay S. Elliott, Pharm.D., BCGP who was the primary investigator for the study noted, “All clinicians strive to improve quality of life for their patients. Knowing patient specific drug metabolism combined with the ability to identify cumulative drug-drug, drug-gene, and drug-drug-gene interactions will only aid in our efforts. This study demonstrates the potential to manage medication regimens specific to the patient in order to increase efficacy, decrease adverse effects, and reduce overall healthcare costs.”

About YouScript
Based on fifteen years of technology development that makes precision prescribing possible, Seattle-based YouScript was founded in 2016 after spinning out of Genelex. The YouScript clinical decision support tool is the only medication management system available that assesses the cumulative effect of a patient drug regimen and unique pharmacogenomic results. Based on over 14,000 curated references and product inserts, YouScript uses comprehensive predictive analytics to interpret and provide an at-a-glance summary of the complex web of genetics, medications, over-the-counters, herbals, and other factors impacting drug safety and response; identifying at risk patients for testing and offering ranked alternatives with reduced interaction risk whenever an adverse interaction risk is found.
For more information, visit: www.youscript.com or HIMSS Booth #823.